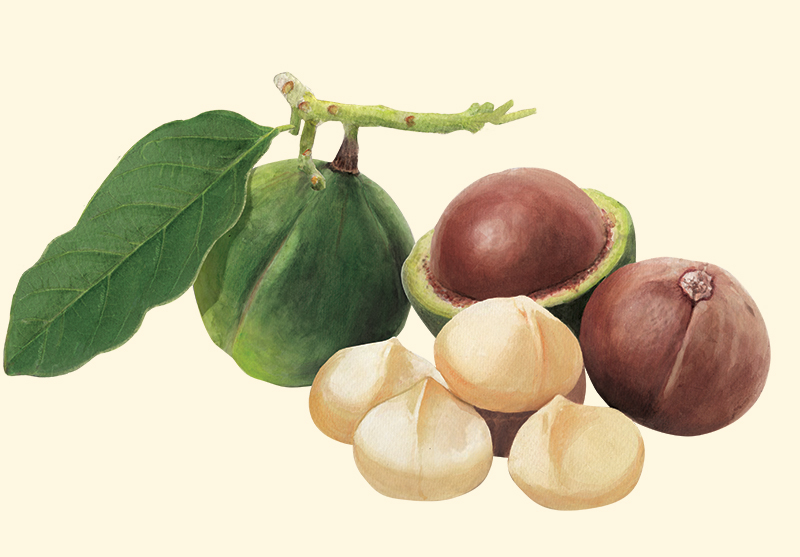 The macadamia nut is a type of dried fruit that contains a high percentage of healthy fats. It can be eaten raw, toasted, or salted. Its delicate and unique flavor makes it a cherished snack. It is used in the food and cosmetics industries. An ingredient in many chocolates, cookies, and ice creams, it can also be enjoyed in salads and pastas.

Research into the health benefits of this fruit is currently being carried out in the following areas:

As a plant-based food, the macadamia nut does not contain cholesterol in its composition. Cholesterol is only found in foods of animal origin. The lipid profile of the macadamia nut is made up of palmitic, stearic (saturated fatty acids), and oleic (monounsaturated fatty acid) acids. It does not contain trans fats and only small traces of lauric and myristic acids, which means that they do not have negative effects on blood cholesterol or cardiovascular health, when they are consumed as part of a healthy diet.

Trans fats have been shown to have an adverse effect on blood lipids, which increases the risk of cardiovascular disease and its impact on overall health. Additionally, trans fats decrease the availability of essential fatty acids in two ways: by substituting essential fatty acids in tissue and blocking the metabolism, thus acting as inhibitors. They also raise LDL (bad cholesterol).

A GOOD SOURCE OF DIETARY FIBER

A GOOD SOURCE OF PROTEIN

A serving (50 grams) of macadamia nuts provides 11% of the recommended daily intake of protein, based on a 2,000-calorie diet. Protein is an essential micronutrient needed for growth and body maintenance. Proteins are a major structural and functional component of cells, and they participate in many important bodily functions. They play a catalytic role (enzymes), a mechanical role (elastin and collagen), a transportation and storage role (hemoglobin, myoglobin, cytochrome), and a protective role (antibodies). They also play a regulatory role (hormones) and are responsible for muscle movement in the body (actin and myosin), among other functions.

A GOOD SOURCE OF IRON

A serving (50 grams) of macadamia nuts provides 15% of the recommended daily intake of iron. Although this mineral is found in small amounts in our body, it plays a key role in many biological processes that are essential for life, such as oxygen transport, neurotransmitter metabolism, and deoxyribonucleic acid (DNA) synthesis. Iron deficiency is the most common nutrient deficiency in the world and the main cause of anemia.

Native to Australia, macadamia trees originated in the subtropical rainforests of southern Queensland and northern New South Wales. The first macadamia specimen was discovered and collected in the wild by the German explorer, Friedrich Wilhelm Ludwing Leichhardt, in September 1843, close to the region that is now known as Brisbane.  It goes by many names, including macadamia, bush nut, maroochi nut, and Queensland nut. Australia’s First Peoples call it Kindal Kindal or Jidnilli. The genus Macadamia was named after the Scottish-born Australian scientist and politician, John Macadam. The great economic potential of the macadamia nut was overlooked in its country of origin for many years. This nut was introduced to Hawaii in 1881. The archipelago quickly became a big producer of this nut, and in advertising campaigns it became known as the “Hawaiian nut”. For almost a century, Hawaii was the biggest producer of this nut in the world, thanks to research that improved its production and commercialization. The commercial expansion of the macadamia nut began in Australia around the 1940s, and towards the year 2000, the country became the biggest producer of this nut in the world. As information about the many qualities of this extraordinary nut has become more widespread, the demand for macadamias and macadamia-based products has increased. It is also a crop that has good yield, which is why many countries have opted to grow macadamia trees. The biggest producers, in descending order, based on cultivated area, are: South Africa (19%), Australia (18%), China (17%), Kenya (12%), Guatemala (9%), Hawaii (7%), Brazil (7%), Malawi (5%), Colombia (2%), Zimbabwe (2%), Mozambique (1%), Bolivia (1%), Ecuador (1%), Paraguay (1%), others (1%).

The information provided in this website does not substitute the expert opinion of either a doctor or a nutritionist. If you have further questions, please ask a health professional or a doctor. The webmaster is not responsible for the use (either good or bad) that third parties might use of the information on this website. Feel free to contact the webmaster at info@ocati.com . This warning constitutes a legal notice.